Real Pirates: The Untold Story of the Whydah from Slave Ship to Pirate Ship 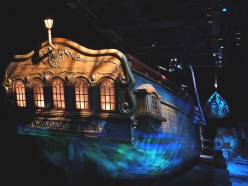 Real Pirates traveled across the U.S. for nearly a decade, from the Franklin Institute in Philadelphia to the Field Museum in Chicago, Maritime Museum in Norfolk, St. Louis Science Center, Houston Museum of Nature and Science, the Denver Museum of Nature and Science, and beyond. Sponsored by National Geographic Society and Arts and Entertainment Inc., this traveling exhibition is an excellent example of an experiential, media-enhanced approach designed to appeal to all age groups. It provides an exciting and educational exploration of piracy in the early 1700s with rare artifacts from the only authenticated pirate ship ever found, the Whydah. It also reveals historical documents proving that the crew was diverse, over one-third African, and that they abided by democratic law, sharing both the decisions and the loot. A committee of eleven scholars led by Cincinnati Museum Center’s Dr. John Fleming, plus extensive historical research provided a basis for contextual and representational accuracy for the exhibit media that I designed and produced. In each of the galleries, videos, integrative media, soundscapes, music, 2D and 3D animation told the chronological story of the Whydahfrom its first journey from London to Africa as a slave galley to its capture in the West Indies by young Sam Bellamy. Twenty-six year old Captain Bellamy and his pirate crew captured over 54 other vessels before sinking in a storm off the shores of Cape Cod. Three hundred years passed before the wreck was discovered. Over 200 artifacts, recovered by Barry Clifford and his team over the past 25 years, provide a remarkable emotional bridge to the ship’s history. A young pirate boy’s stocking and shoe, a bent pewter teapot and other artifacts forge an intimate connection to the people, time and place. The media, integrated with sets and lighting, contextualize the artifacts and provide visitors with an authentic, immersive experience.

The introductory documentary, which I produced, directed and wrote, is narrated by actor Lou Gossett Jr., and shown in a theater at the beginning of the exhibit. On the surrounding walls are large paintings of the four main pirates on whom the exhibit focuses. Visitors arrive, fill the theater and the film begins with dramatic music. At the end of the film, the ship sinks in the terrible Nor’easter storm and the screen fades to black, but the ship’s bell continues to tolls amidst big claps of thunder. In total darkness, bolts of lightening flash on the four characters, then a final bolt directs the visitors’ attention back to the front of the theater where now, in place of the screen, the actual ship’s bell is suspended in a cylinder of gleaming water in the next gallery. A replica of half of the ship is dressed with props and life-like mannequins representing characters based on the ship’s logs and other historical data. The set comes alive with sound effects that I recorded on a wooden tall ship (see title page photo). To ensure authenticity, I located a replica of a vessel similar to the Whydah, made of wood with rigging, canvas sails, and a bell true to that time. I cast and directed Shakespearean actors for the pirate voices. The accents and dialog were based on historical research, and I hired a dialect coach to ensure accuracy. Visitors board the ship and enter the captain’s quarters where Sam Bellamy looks out the aft windows. From his viewpoint, visitors see the sun rise over moving seas, creating a sense of the ship moving up and down. This effect was created with computer-generated animations that fit the five windows and give the impression of looking out to sea. From the outside of the ship, it simply appears as though a light is on inside the Captain’s Quarters.