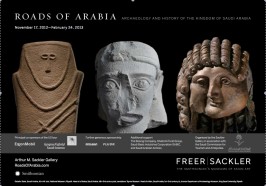 The extraordinary new traveling exhibition, Roads of Arabia, premiered November 17, 2012 in the U.S. at the Smithsonian’s Freer/Sackler Galleries with films produced by Blue Bear Films. Over 300 artifacts, many recently discovered and never before seen in the U.S., reveal the largely unknown cultural history of the Arabian Peninsula. The exhibit is open in Washington D.C. until February 24, 2013 then travels to the Houston Fine Arts Museum and other venues around the United States.

Hawks in the City